A stick stolen by a carp, three days of waiting followed by three days of intense fishing, rich meals, dreamlike views and the promise of return. This is how you can describe the experience of the six Romanian fishermen who were visiting the Ebro, a sort of “Mecca” of carp fishing, in the period of May 8 to May 14. I talked to some of the guys and they told me how it was:

Savu Florea: “It’s like another world there (…) It’s such a lunar landscape.”

“It was great, I have a high opinion of my experience there. Two of us have been there also in 2011. This time was slightly weaker, compared to 2011, and based on the amount of fish caught. As to how we felt there, there’s no room for a comparison. In 2011 I had no guide, no assistance, I went there only with the information I got at home, in my country, talking to other fishermen who had already been there. However, this time I went with the guys from Team Idella of Spain and they took care of absolutely everything.

They were really OK as hosts. I mean, we’ve changed a little our opinion about the Romanian hospitality which, in my opinion, was kind of screwed. Now I think otherwise because the guys were very, very friendly and nice. They were very well organized. We actually had everything we needed there. Absolutely everything! From the point of taking us from the airport to the meals, to taking walks where ever we wanted to, to shopping… they literally tickled all our fancies.

The first three days were very strange. I mean, we knew how it was the last time we were there- when we caught as much fish that we got bored and we wished they stopped biting – now we caught no carp, but after that we started to catch some.

After three days of sitting there we went to look for another fishing spot, where a part should stay from morning to night to see if we catched something and then we should have called also the others to join us. We first went to a place, where it was not ok, and then we found another place, where there was a Romanian who caught four big catfish, one of them weighing 70 kg. He was leaving in the evening and we asked him if we could also stay there starting that evening. We were staying more, anyways. He had no problem with that, since it was a very wide spot, and we settled there, and it eventually worked out. I caught fish, it was fine, although we got scared the first three days, knowing how it goes there.

I understand that Robert and the boys from Idella are going there again in October, I honestly say that I would go this time too, in October, and not only next year. But I can’t, I have no time to go. But I would go, there’s no question about it. I think any of us would want to go again. It’s like another world there. The landscape there is very interesting. It’s such a lunar landscape, very arid, it shock’s you a little bit. But then there is that wilderness and many fish, very wild fish. It’s cool! “ 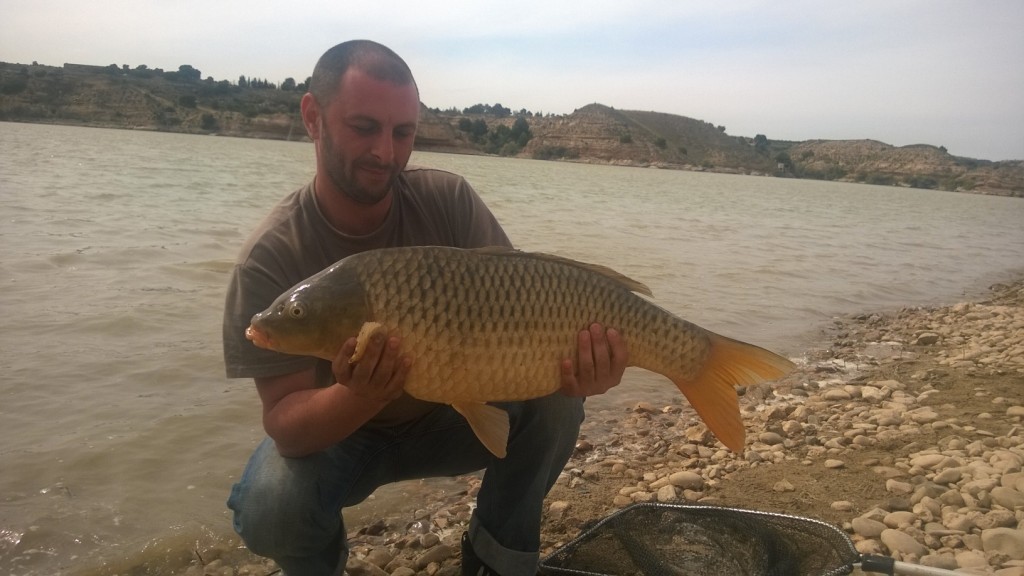 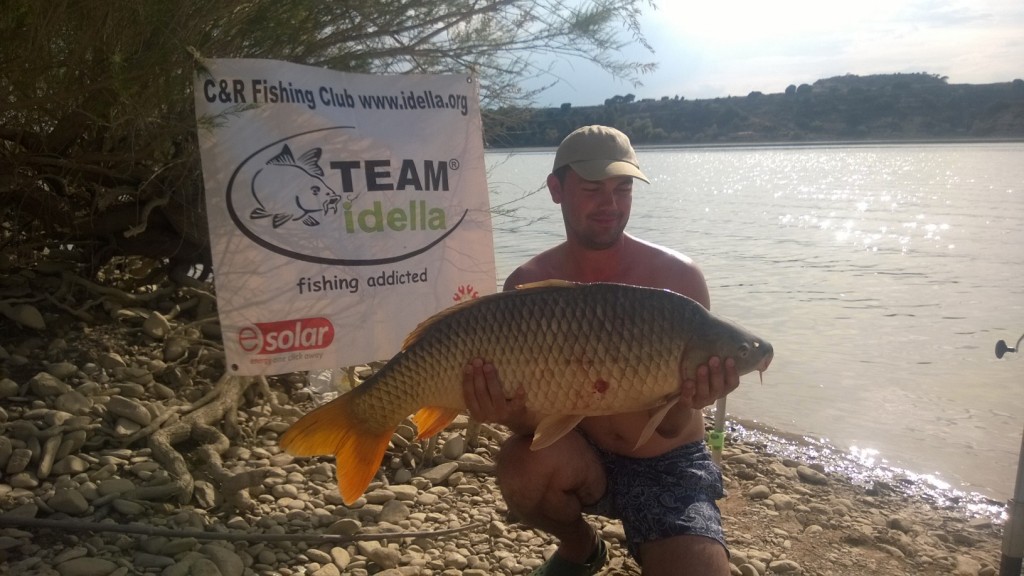 Cristi Muresan: “The Ebro does not compare to any fishing area in Romania”

“It was great. The scenery is gorgeous, like a canyon or just like being on the moon. It’s very strange, it’s just rock, little vegetation, but everything is very beautiful.

In terms of organization, we were very surprised, I had all the facilities, including water, juice, cold beer, food kept at cold , we had a fridge, electricity, we had a place where to shelter in the shade, we had just everything, everything. Including a chef brought from the Delta area, so that we enjoyed outstanding meals: fish brine, fish pottage, egg salad, beef soup. I ate better than at home.

We all fished, but I did not just go for the fishing. Fish there is, I think for anyone to catch. You can catch a lot on the Ebro, there must be a few connoisseurs and then you can catch yourself. Someone has to guide you, to show you the best places, to show you how to fish and then you catch. We also catched, some more, some less. I understand that those who were there last time did better than us, but still, the Ebro does not compare to any fishing area in Romania. On the worst day, I caught much more fish than in any location in Romania.” 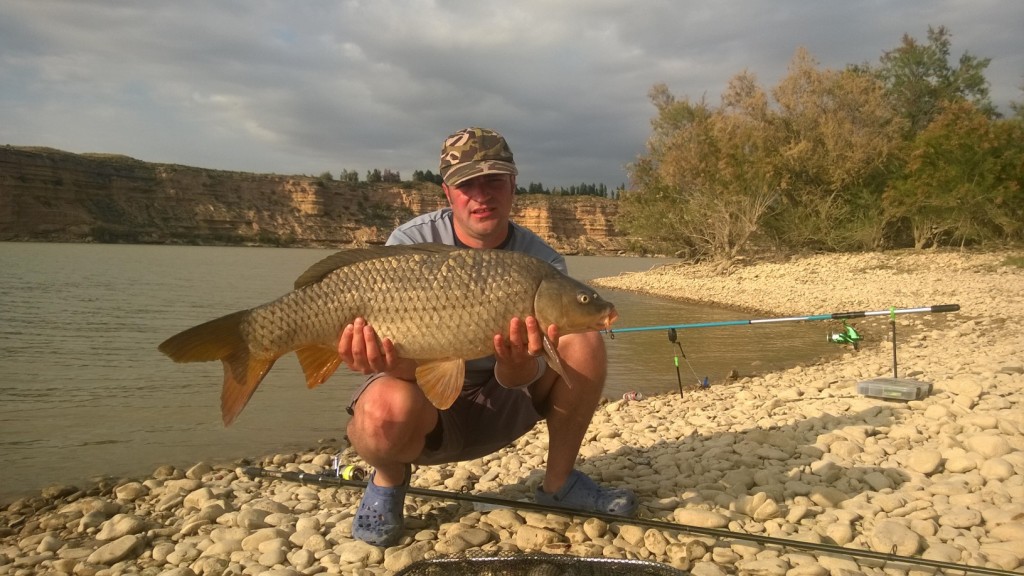 Carp capture – fishing in Spain, on the Ebro – Team Idella

Marius Bârsan: “It was, to say so, a full holiday.”

“It was very, very nice. Impeccable, really. I’ve been on the Ebro in 2011, but now it was significantly better, meaning that the boys from Idella came, took us over, and they took care of everything. It was, to say so, a full holiday. All six of us who have been there say that we will come again next year. It was a really enjoyable experience.

The organization was very good. We have no objection or, to say so, a weak point. Otherwise, with the fish, it was like we went fishing. There can be no linearity. There were two days in which we caught nothing, then it got windy and we caught good fish. If you want to go, I totally recommend you to. You must have an appropriate equipment there, meaning that if you go to catch catfish you have to fish specifically for catfish, and if you go to catch carp, you have to fish for carp. We went for carp fishing. 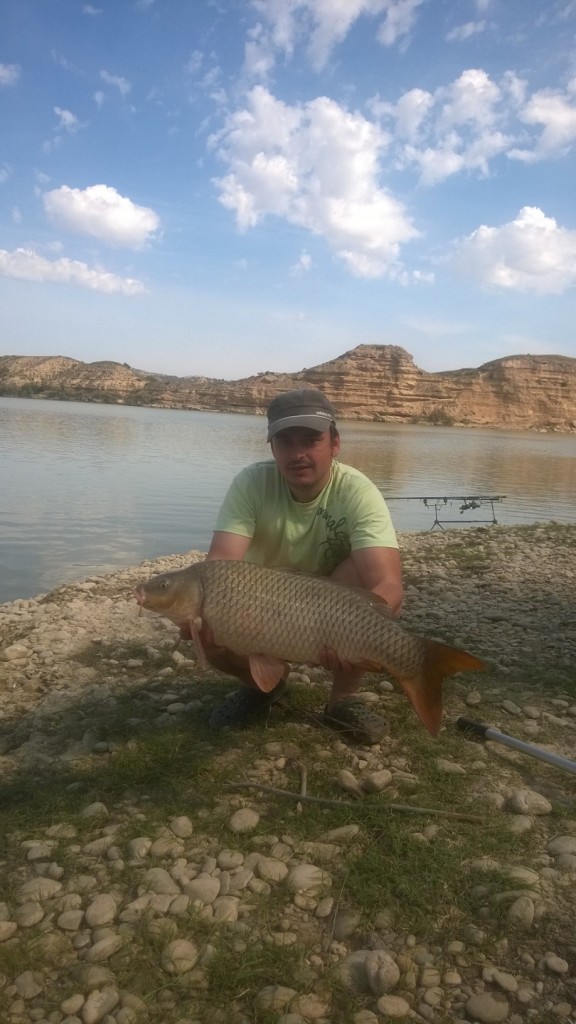 Carp caught fishing on the Ebro

“It was a really neat experience. There were also some nasty moments (he laughs) because I arrived there with high hopes and I heard from others who have already been on the Ebro that they caught great fish, that they could not cope, they said their hands hurt from so much fish they had caught, mainly carp. I expected it to be the same, but the first three days I did not have any catchings. The fishing grounds were pretty busy and our colleagues from Team Idella received us and found us a nice place in terms of camping. The water was kind of big at our fishing spor, this was the only cause, the water was about 15 m and I suspect that the bottom was much cooler and the carp would not stay thre. After three days after, after we lured more and we saw that it does not work, we thought it would be appropriate to take action, to seek another place.

Half of my colleagues went looking for a place and met a Romanian angler who has been there many times and knew the boys. He caught about six carp in the area and about four large catfish. One of 70 kg, one of 40kg , one of 20 kg and one of 15 kg. He was leaving that day so after he left, we took over his place. The first night we did not have too many results, but the next day we started to catch more. It was warm when we arrived, and the next day it got windy, there were some waves and the fish immediately began to bite. Carp began to come one by one, to all of us, and we started to catch better. The largest fish was a carp of 15 kg, and the rest was an average between 8 and 10 kg. It was great! Right on the last it was like we did not want to leave anymore, then it worked the best, right when we had to leave. It was already two o’clock and the fish were biting one after another and there were big waves, like on the sea.

The organization was great! Too good to be true! We had all the facilities. I even said that next time it would be pointless to haul so many things, such as refrigerators or generators. It was great! I have nothing to say, I am very satisfied with the boys. They were the best! They treated us very nicely, lest we miss something. I have nothing to say against them, it was great, really great! If they will receive us, we certainly go again next year, but not in this season. I understand that this time the fish began to spawn and that there is no spawning season on the Ebro there, such as here, ​​but there are three spawning periods. We had a guy with us who graduated in Agronomy and told us that there fish spawn three tims a year, the climate being more favorable.

At one point, I was left without one fishing stick, a carp took it and went off with it. I was having a meal, about 30 meters away from the stick, I saw it bites, I ran towards it and when I got to 15 meters I realized that I could not hear the alarm I thought it got away. When I arrived… there was no stick. I had so much luck… If I tell you, yo will say it’s a fishing lie, but it is a real story. My colleague, as he pulled out the last stick in the evening, hung up the wire on my stick, the one I lost in the water. I slowly pulled the wire and the stick out, alltogether with the fish. We all thought it has to be that great catfish, the one of 80, 70 kg … so we thought since it went off suddenly my stick. When he pulled out the stick, it was a damn carp fish, one about four or five kilograms. I thought it has to be quite a fish since it got away together with the stick. It was agony and bliss. It was great!” 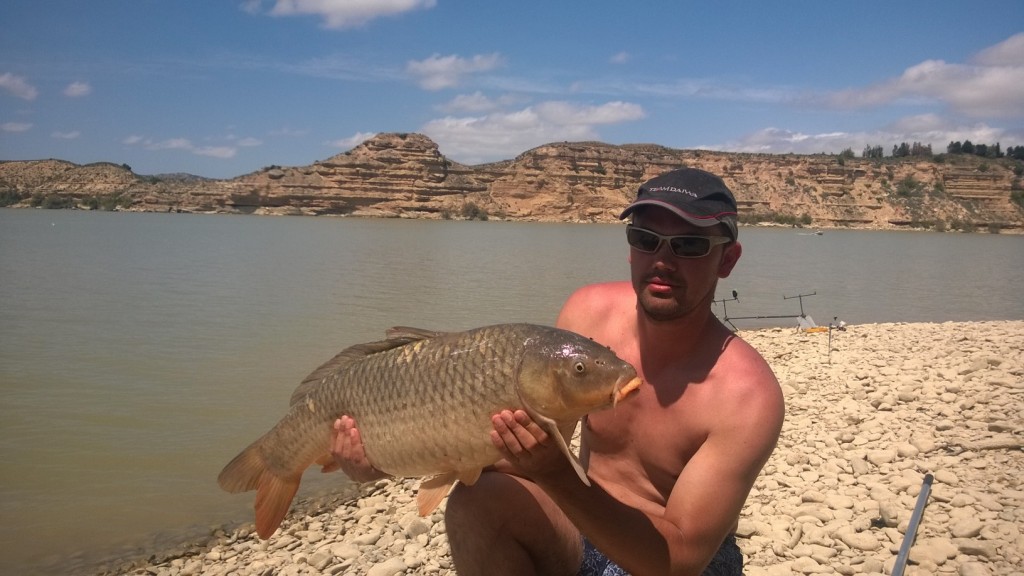 Carp fishing in Spain on the Ebro 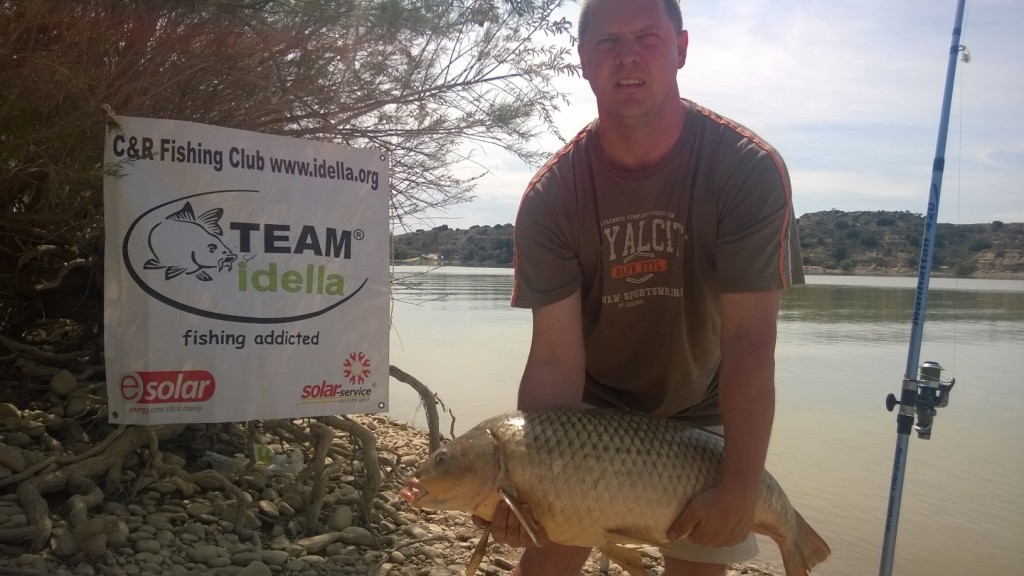 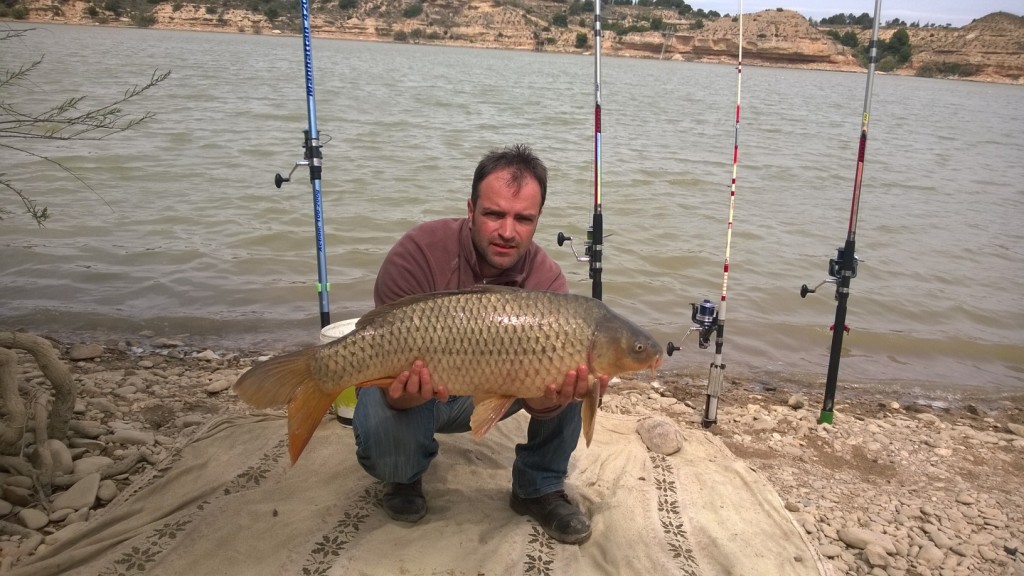 Carp Fishing on the Ebro with Team Idella 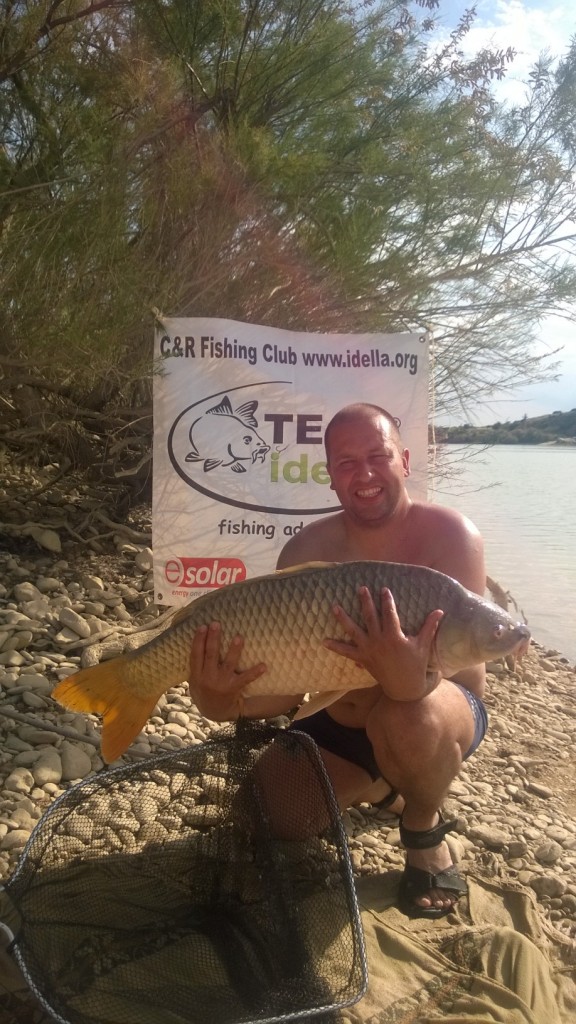 Fishing on the Ebro in Spain – catch carp