Pompy Aranyos from Team Idella recently returned from Thailand, where, although he was there on vacation, he did not miss the chance of a fishing game. How the location was, what he caught and what facilities Gillhams Fishing Resorts offers you will find out in the interview below – a conversation packed with “tips” that will help you a lot if you like the idea of fishing in Thailand.

How did you get precisely to Thailand for fishing?

There are two lakes in Thailand which are known internationally. One is Gillhams Fishing Resorts, where I was, and another one that is called Jurassic Mountain Resort, where I wanted to go initially. Last year I’ve been on Ebru and I became friends with an Englishman living in the Netherlands. I told him I wanted to go to Jurassic, I had already called there – I almost made the booking. But he advised me not to go, because at Gillhams there are much bigger fish and the location is much prettier. Indeed, it’s a little bit more expensive, but it’s more OK in terms of quality of the fish, compared to Jurassic. That’s how I got there. The location is marvelous! It’s every fisherman’s dream to get there! Like Ebru is for many others. 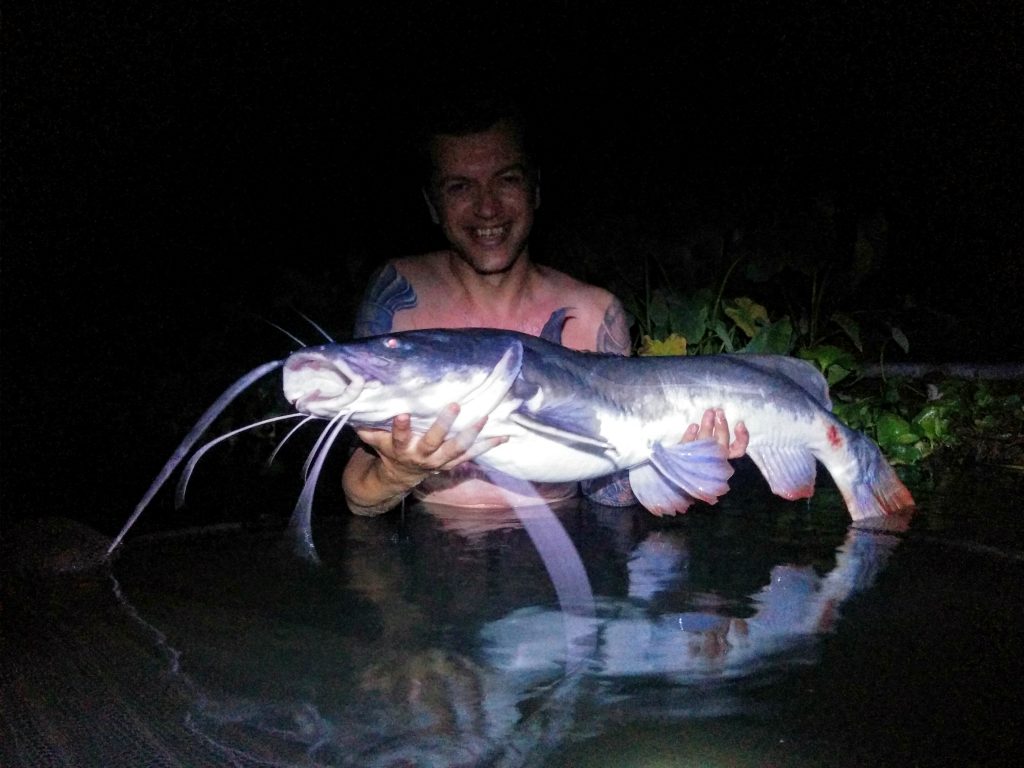 The accommodation is perfect, the water is very OK, and there is a lot of fish. One thing I did not like. They have several fishing guides there. Before you start the fishing game, you are given a whistle, and when you have a fish on the hook you have to whistle for the guide to come and help you pull the fish out of the water to take photos. You don’t handle the fish at all! That’s something they need to do, it’s mandatory. Besides, they should help you with the lure, to tell you which are the good places, all these kinds of stuff. They are not paid by the resort, they have no salary, their meals and living are ensured by the tips they receive from the fishermen. Then, obviously, if you give them tips they help you, if you don’t, they don’t help you. It’s a bit crappy, because, besides spending a lot of money at the resort, you have to give them tips too, and that seemed a bit stupid to me.

What kind of fish you wanted to catch?

I left with my mind set on Arapaima – since that’s their biggest fish – and they took me to a place they said it would be the best for Arapaima. I cannot say that I didn’t see any Arapaima in the area, I had three serious bites, but unfortunately there was also some bad weather, with rain and thunderstorms, and I did not catch anything. Eventually I told them that the spot was not OK – I was staying there for already two days and I didn’t catch anything – and that I want to move to another spot. I moved and then I started to catch something, but it was pretty weak compared to what I expected.

The location is beautiful and there is fish – no question. While I was fishing, right on my spot, they have put some Siamese carps weighing between 15 and 20 kilograms. The other fishermen also caught some of them. Right next to me there was an Australian who was fishing for two days and had tremendous luck. On the second day he already caught an Arapaima weighing  200 kilograms. Further evidence that fishing is about 90 percent luck and 10 percent science. Something around there. However, the truth is I would get to that place again,  because the location is a dream! 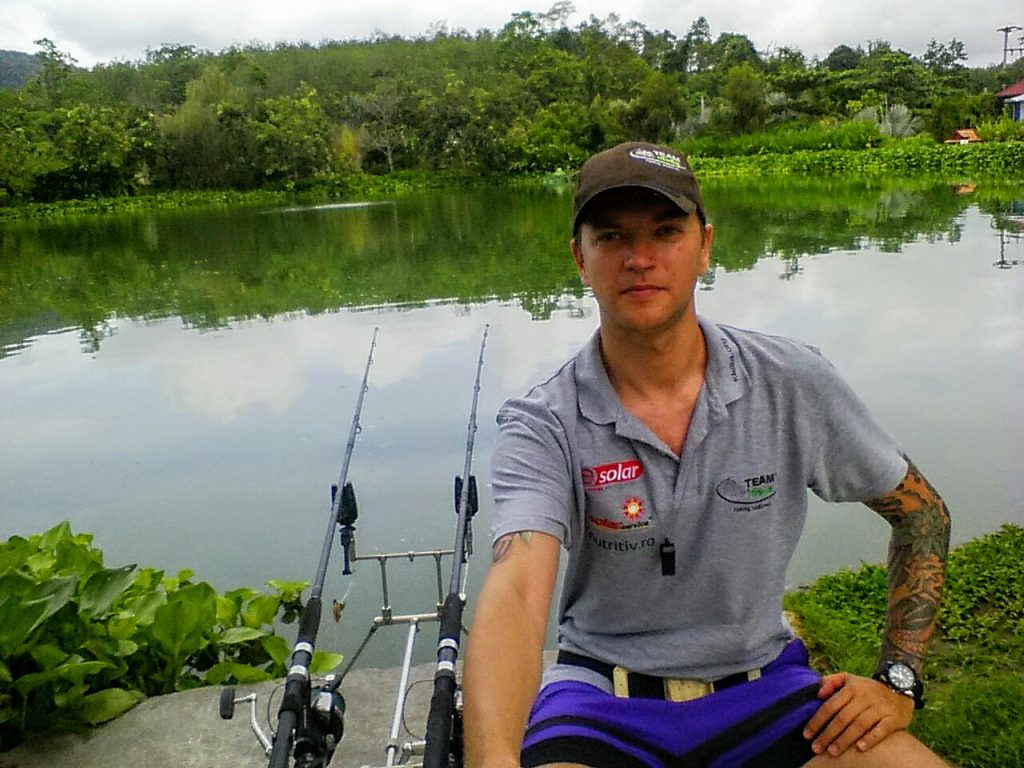 What style of fishing can you approach there? Fishing for carp?

What I noticed that is working well for catfish is to fish with pieces of salami. I caught a catfish with salami. The location being managed by Brits, there are a lot of English people coming there, and since in UK they fish a lot with canned meat, they use canned meat also at Gillhams.

Related to lure, you might lure with a rather strange ground baits and with pellets. They let you bring your own bait, but I don’t know who would want to carry the lure so many kilometers. But you can do this if you necessarily want to fish with a certain type of bait.

What limit did you have on sticks?

The limit is three sticks. I was fishing with two, anyway I usually fish with two sticks because I don’t like taking care of too many sticks. The idea is that if you have a stick more, you pay extra money. Another thing I did not like is that you are somehow limited on the lure, meaning that for the money you pay they give you a certain amount of a lure.

Somehow they kind force you to buy more, so you might catch some fish. Well, you also can have great luck, as the Australian I told you about had. He caught that huge fish with one bead. Plus that he stayed in a place where you usually cant’ catch Arapaima … Beginner’s luck! He wasn’t even a fisherman. 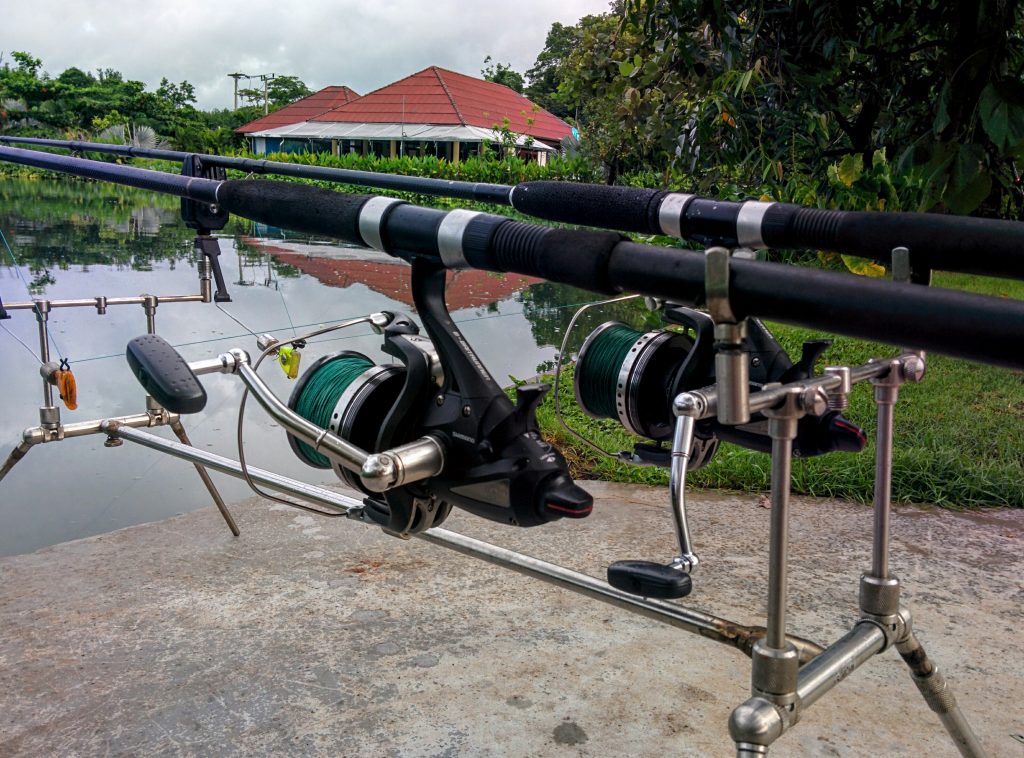 How many days did you fish?

I spent four days fishing. I even caught a period that was quite OK. I heard that before I arrived, there were two or three fish caught throughout the lake. Very weak! Usually the catch is huge. It was probably because of the weather, it rained a lot and there have been weather changes since. One time it was sunny, one time it was raining. However, it is worth it! It was a wonderful experience.

I saw the pictures, you caught very beautiful fish!

Yeah, I caught two Pacu, one of them very large fish- it is the fish which has teeth similar to those of humans. One weighed around 18 kilograms, the larger of the two Pacu. It seemed much bigger in the picture, because it’s very wide, it is an odd shape. The first weighed about eight kilograms.

I also caught a red-tailed Asian catfish, a pretty cute one. There is fish, I saw that Arapaima was caught too, and all kinds of Siamese carps. It is really worth it! It’s worth going just for fishing.  I went on holidays to Thailand and I told myself that it would be a shame not to go fishing if I get there. 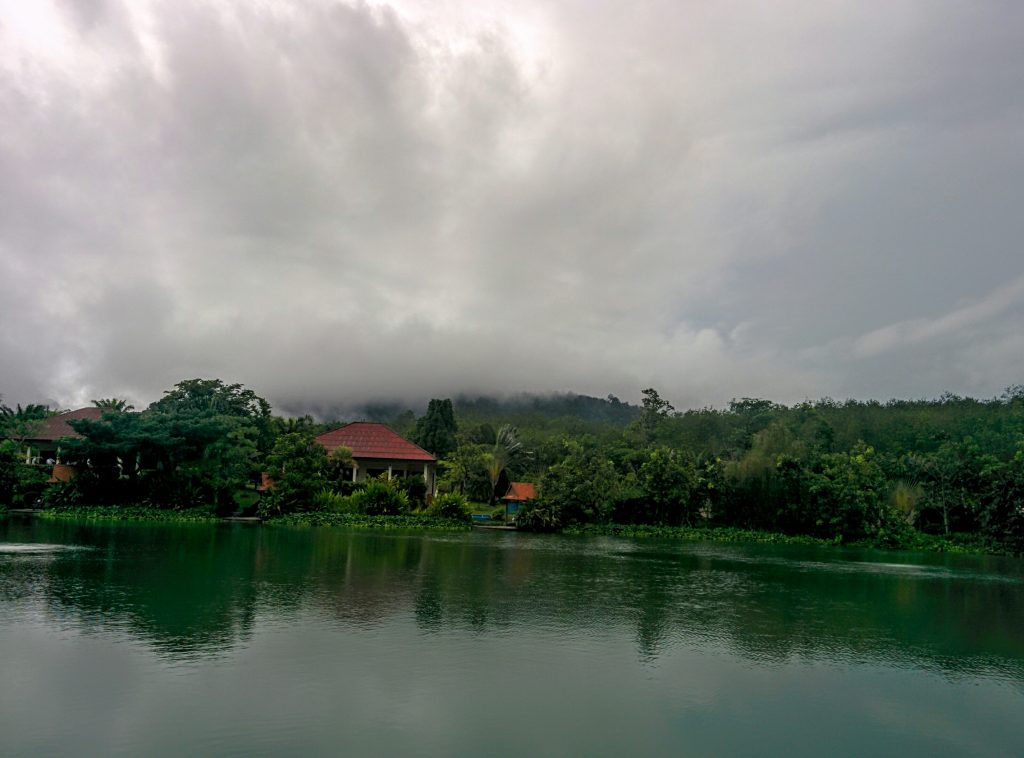 So you didn’t go expressly for fishing…

Yes, I didn’t go for fishing. I took advantage of the fact that I was there and I fished, and I do not regret it. I only regret that I haven’t caught Arapaima, because that’s why I went there, but there will be other occasions.

Would you recommend Gillhams Fishing Resorts as fishing location?

Yes, of course! Especially for what fish they have! Besides the pool where you fish, they have also a farm of Arapaima. When they were leaping and fluttering their tails, I practically jumped up from my chair. Such “animals” they have. And the people really take care of the location. For example, every morning they check the pH of the water. It’s obvious they invested a lot of money in the place. They are very carefully with the fish. They fish with hooks without painter, or with a broken or bent painter, so that they don’t hurt the fish.

That’s not the only thing I did not like – the guides. When you go to a pool and you do not know and you are somehow limited to fishing tools and lure, a little help matters a lot. It’s not like you are going there with the car filled with lure and bait and you’ll be able to try anything out. You are limited. For example, in the morning, I have been asking the guide for pellets, and he brought me some around three or four in the afternoon. The day was almost over, you know? It was a bit annoying, but that’s it. Next time I’ll know. Anyway, I recommend fishermen to go. It is really worth it! 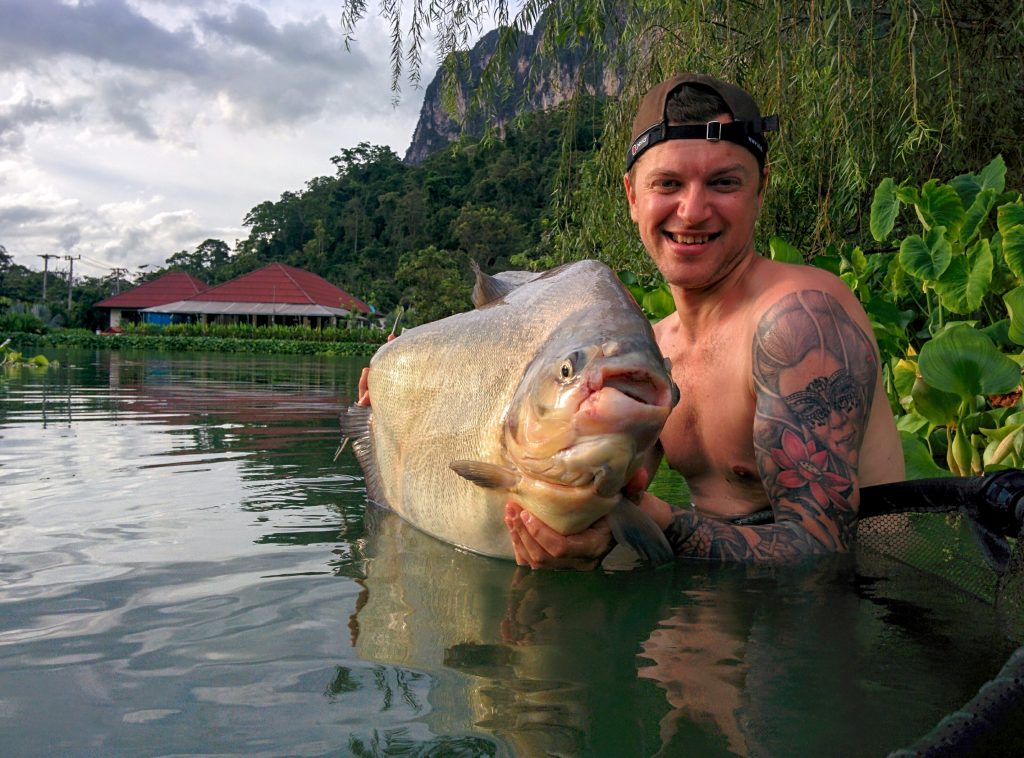 The most I liked the location. It’s great! Everything’s green, it’s beautiful, it’s clean. The food at the resort’s restaurant did not really thrill me – I’m a little more skillful in the kitchen and therefore I might be a little pickier – but the location is excellent.

And if you don’t fish, you can find accommodation there. You have a pool and all facilities. Now they build some sort of spa with sauna, massage, stuff like that. It’s a wonderful location! Very nice design, it’s quiet … Awesome! Just awesome!

More images can be found here.