I lived both experiences in 2013, together with fishermen with years of experience behind on each of the two rivers, which is why I noticed the differences and the similarities, the advantages and the drawbacks of a fishing party on each of them.

Fishing On The Danube 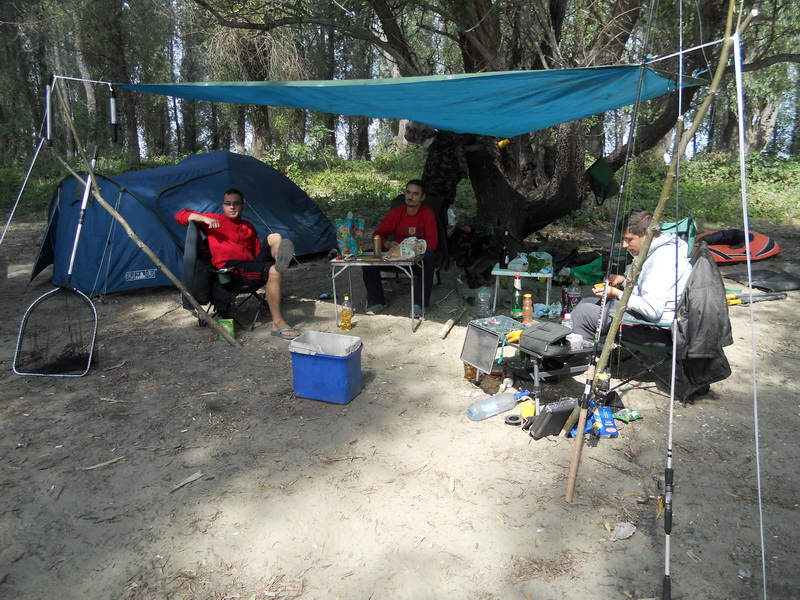 Fishing on the Danube

In 2013 I went fishing on the Danube 3 times, each time for about 4-5 days, but before the prohibition and at the opening in the area of Bazias, and also in September in the Calafat area. At Bazias I fished in the bay, in calm waters, almost stagnant, between 20 and 120 meters away from the shore, with prepared corn, pellets, Barilla or raw food. The five of us have managed to catch just crucian fish, up to 30-40 pieces together, for each time. Pressure and weather conditions were favorable in several days, the bait thrown into the water was consistent, but other fish would not bite the bate.

At Calafat I fished with two fishermen who grew up in the area and have basically tons of fish caught in the Danube on their credit, counting only the fish caught with the sticks. The weather was good for two days, whereafter the water rose 80 cm in one night and it got windy and wavy. The fishing area is semi-wild, bringing good results including the year in question, but it seems that the fortune avoided us at fishing. 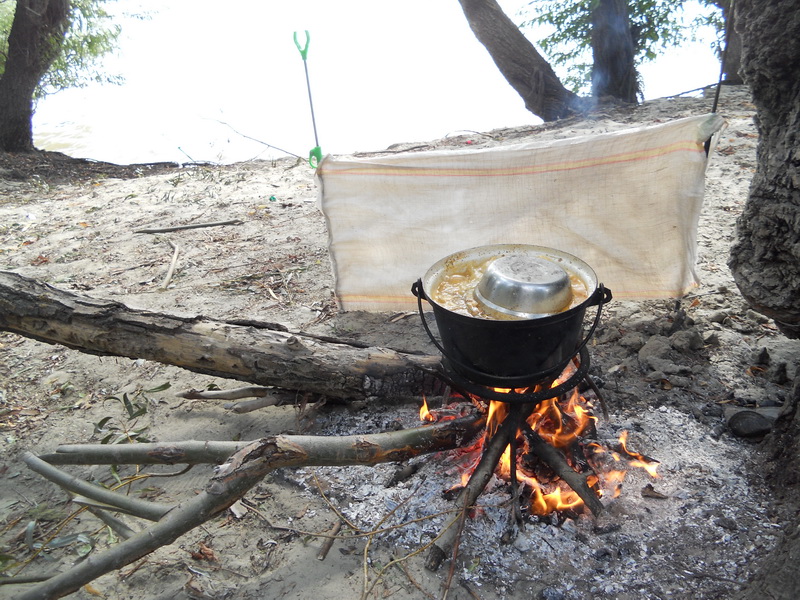 Cooked food – fishing on the Danube

For example, there were pulled out 130 kg of wild carp and amur from only one place, and within 48 hours, amonth before. In another nearby place there was caught a ton of crap, within a month, the specimens averaging between 13 and 17 kg.

Even if there is poaching in here, as everywhere, there is fish, you just need to have the good fortune for someone not to have given electric power a few days before, because that stresses the fish so much that it will need several days, maybe even 2 weeks, to resume it’s feeding behavior toward the shore. At the end of the fishing party I found out that there was a local four days ago who “fried up a bit” the area, because he needed fish. In such conditions not even the net fishermen have caught fish, not only us. The strange thing is that such occurrences happen frequently throughout the Danube, sometimes right with the coverage of the border police. 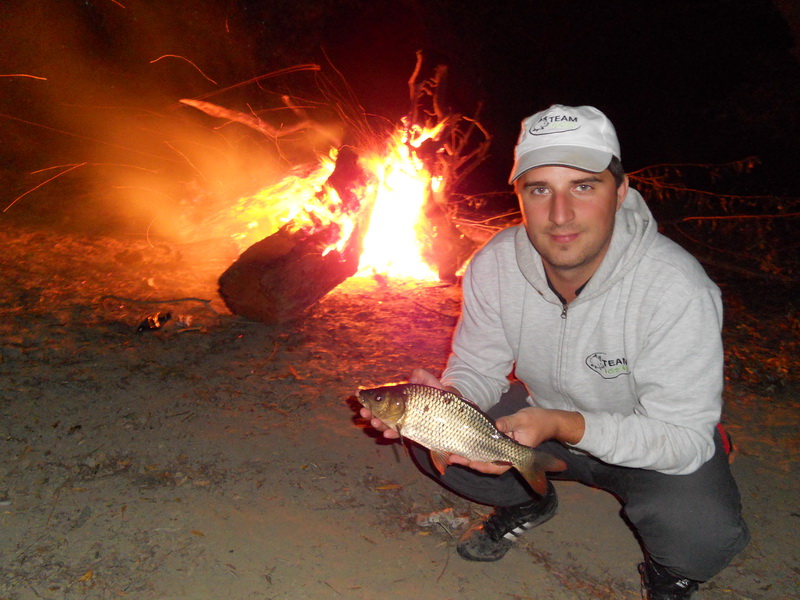 Carp fishing on the Danube

For example, the funniest accident happened also here, when a fisherman noticed a poacher who was frying up the Danube for about 1 km from the boat. He called 112 and explained where he is and what is happening, requesting support for removing the poacher. The poacher, after having made a round and starting the second, the moment he reached face to face with the legal fisherman, directly replied to him: “Hey, there’s no room for me? You thought you fix something if you call 112? ” It’s not hard to figure out the amazement on the fisherman’s face. This is a black humor, typically Romanian, in a country where “the fish bagger” makes the law, and the corrupt authorities respond depending on how big the bribe you give them. I know 35-40 years old fishermen who have fished a lot on the Danube, but in recent years they have accumulated so much frustration that they do not even want to hear anymore about it and prefer to fish for carp in Serbia and Hungary, in civilized conditions, and in private ponds. 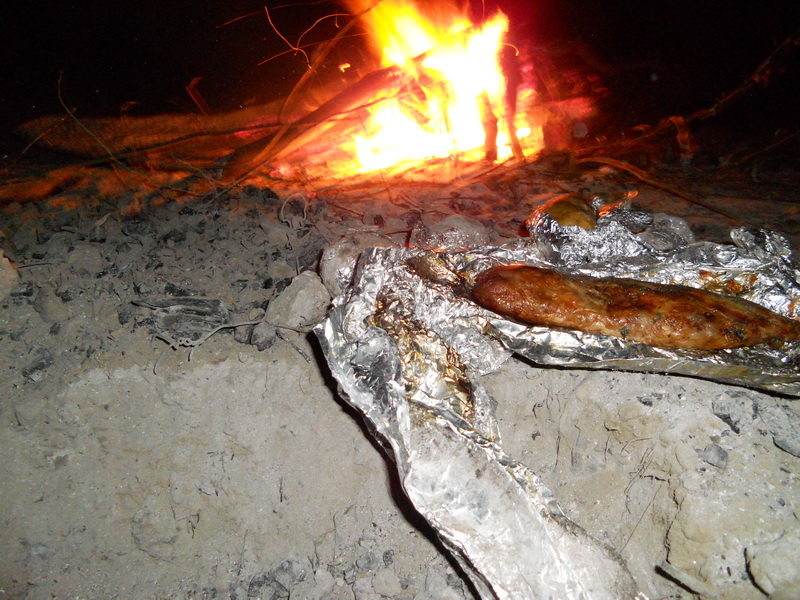 Food pit instead of fishing

So, we were left all this time to test various recipes, including pork ribs grilled on coals in the pit, to drink wine and beer and to indulge in the frustration (yet again) that the Danube remains a river for cruises and drunkenness, not for fishing.

Fishing On The Ebro

On October 16, 2013 I boarded a plane with my colleague Robert – fisherman, and Marius – amateur, and we were picked up in Barcelona by two other colleagues from the Spanish branch of the Team Idella club, whereafter we went straight to fish on the river Ebro or the Ebro, how it is called locally.

We camped in tents and cars directly along the water, have manually lured the surface to about 40 meters and released the sticks. In a few hours I had already have an answer: a wild carp, about 12 kg. Then every 2-3 hours we caught a carp between 8 and 15 kg, especially between 10 P.M. and 08 A.M., the daytime activity being slightly weaker, about 4-5 hours long, but still we caught. The biggest catch was a nice 20 kg carp. Other species caught: eels, rudds weighing 0.5 kg/a piece, 1 kg breams and crayfish. Catfish would not bite in any way for 4 days in a row while I fished on the Ebro, neither at us, nor at other stranger fishermen around us. 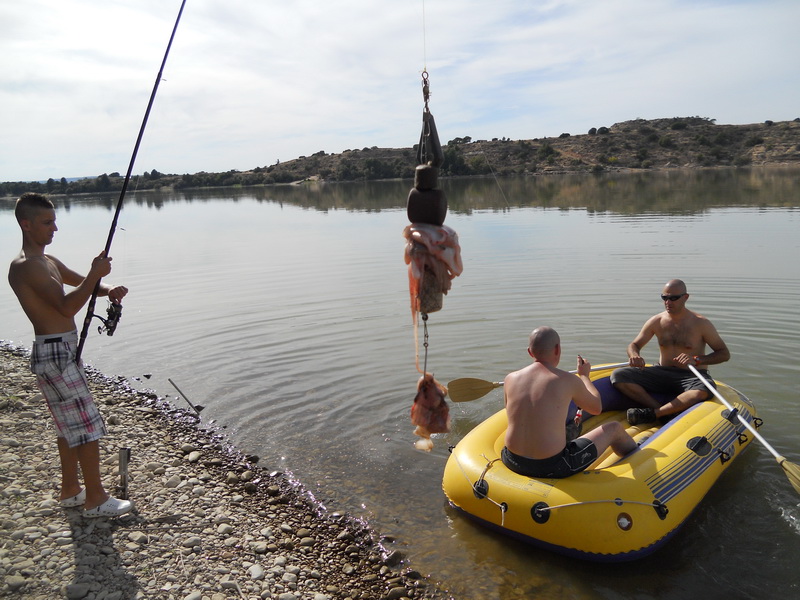 Planting for catfish on Ebro

We used Halibut bait, a 20 kg bag bought locally, and we had pellets, Boiles Robin Red and Halibut on pur hooks. The last night we started to plant from the boat and to bait the place with corn. The results began to be better, having sometimes even 3 “rund” simultaneously. Basically at some point we invited each other to counter because our hands were hurting from so much fish we had caugt. We released the carp in the water. Is is mandatory to do so on the Ebro. You are allowed to take home only the zander and the catfish, you’re even forced to leave these two species on the shore if you catch some. We didn’t do so at all with the zander.

We can say that in 2013 we finally were on a river where we caught fish until we got bored. We caught as much fish on the Ebro as on the ponds of Debeleace or Belo Blato in Serbia, which are well managed private pools, full of fish, where we also held some contests. But we still caught fish on the river, which I dreamed for a long time to happen. We thank our colleagues from the Spanish branch of Team Idella for the accesible package of services offered and for the satisfaction of having a successful fishing game on the Ebro. 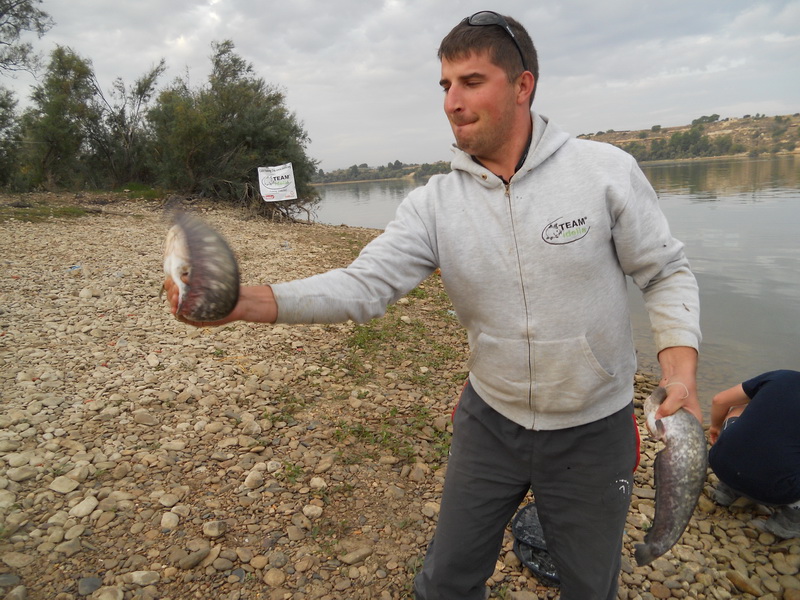 Catfish fishing on the Ebro

Fishing on the Danube – ADVANTAGES:

– You’re in the country, it’s easy enough to come to the fishing spot;
– You are in semi-wilderness or semi-civilization and you can make a fire and food;
– The places are beautiful and relaxing.

Fishing on the Danube – DISADVANTAGES:

– YOU CATCH NO FISH! You only catch frustrations (if you have not had enough in daily life);
– There is no hope in restocking over the Danube, not out of good sense or education, not even because the law;
– It remains a river without fish in a no man’s land, sorry! A country of thieves, of stupid and corrupt people. 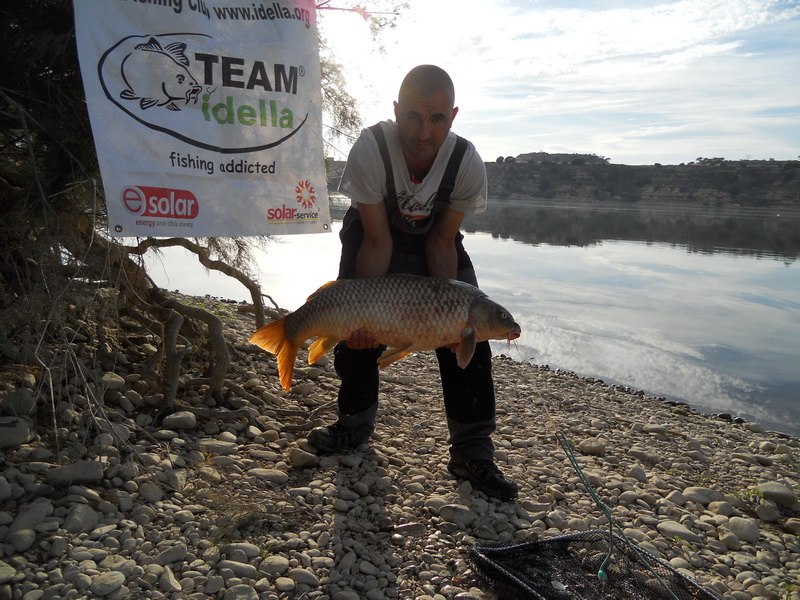 Fishing on the Ebro – ADVANTAGES:

– YOU CATCH FISH UNTIL EXHAUSTION!
– You fish for several species, with big chances to catch some;
– Reasonable costs: about 250-300 euros for six days, not included the flights (which is about 70 euro if you book in time).

Fishing on the Ebro – DISADVANTAGES: 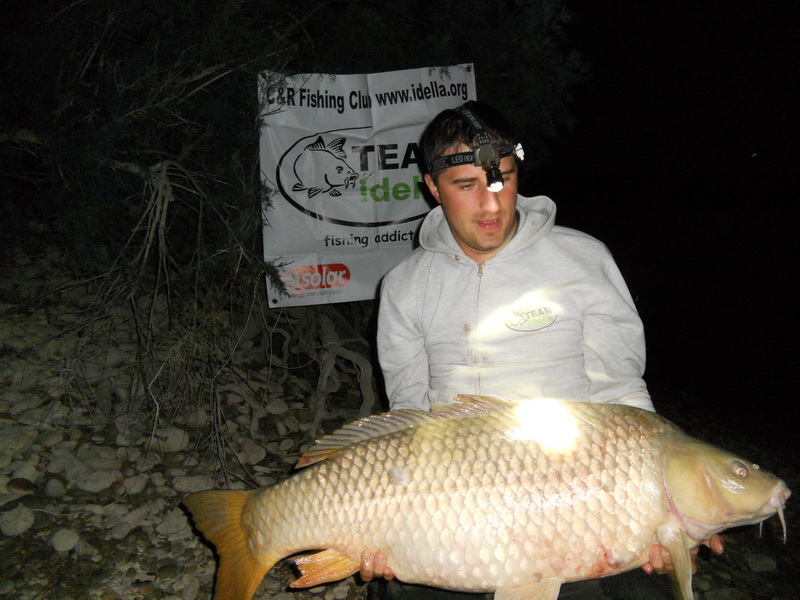 What’s nice in the civilized world is that you can clearly distinguish between the activities that you desire. If you want to catch fish, you go fishing on a river and you fish because there is fish to catch, if you want trips and walks you go camping and you put your tent out. In Romania you never know what unpleasant surprises await you, and you will continue to collect frustrations in the fog of corruption and of administrative incapability.

For the Team Idella club it is clear: GO WEST, baby!

An article by Constantin 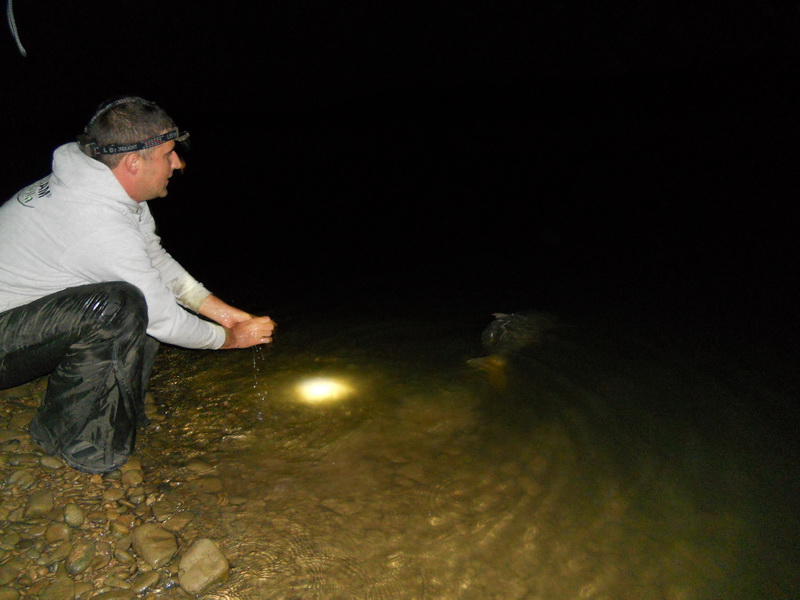 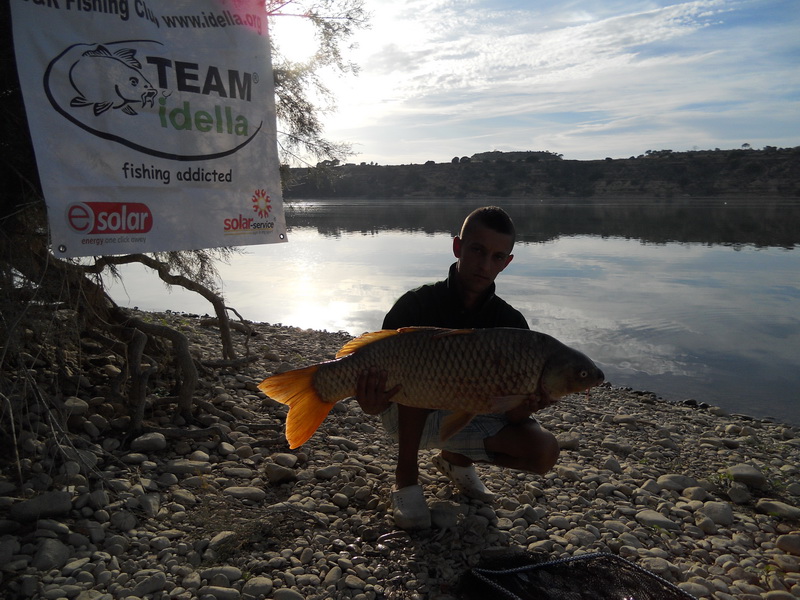 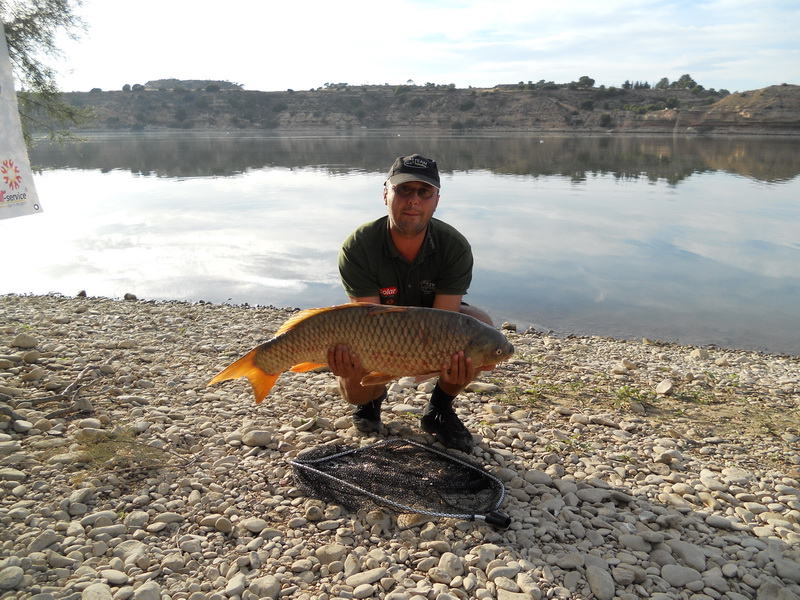 Carp Fishing on the Ebro 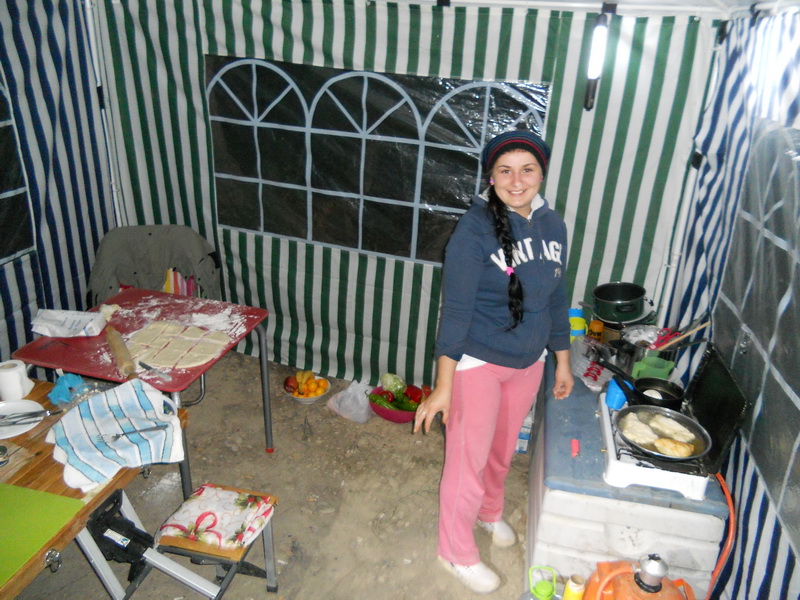 The kitchen of the Ebro 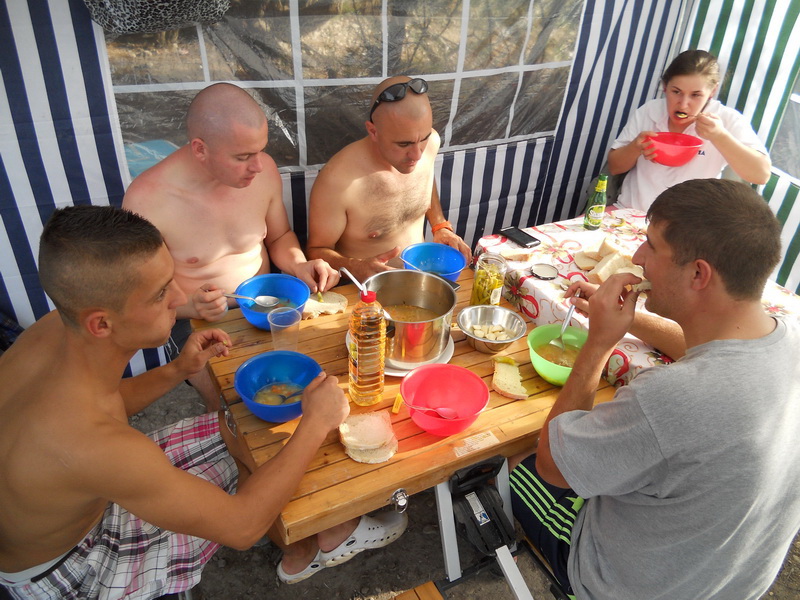 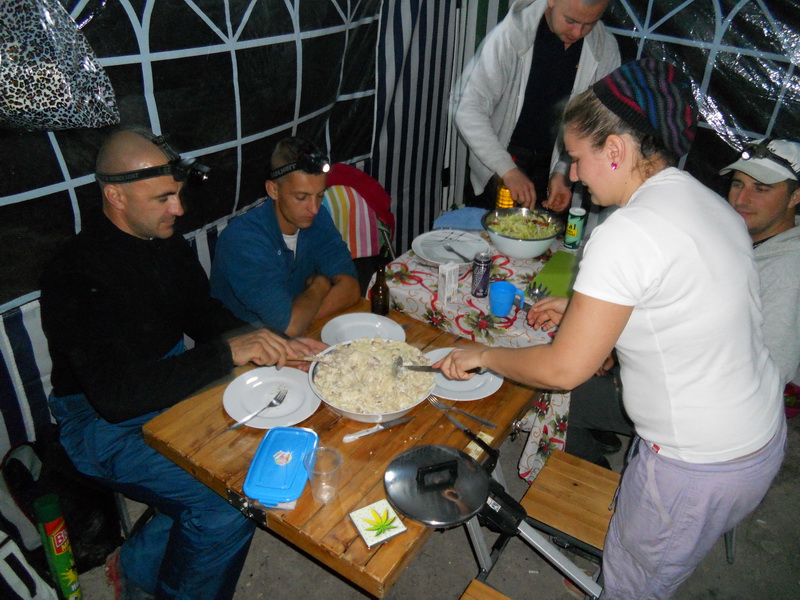 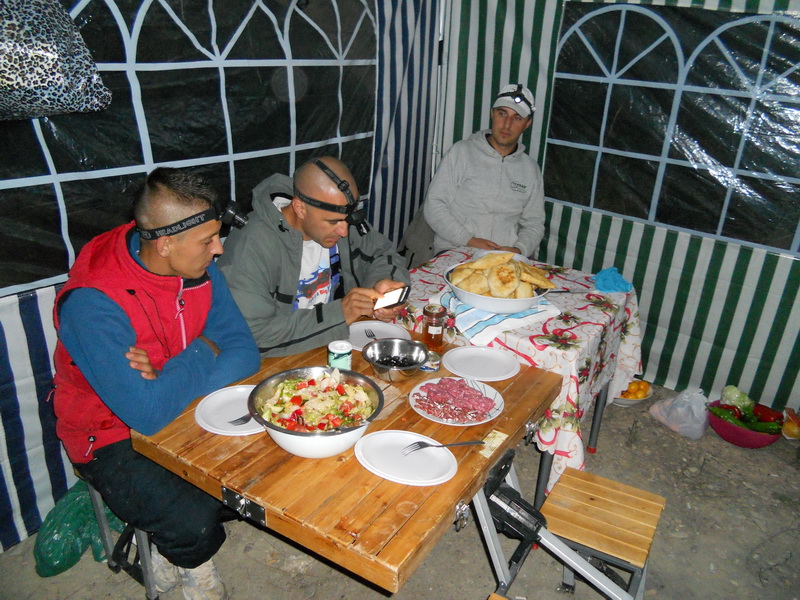