Sebastian Buta and Gicu represented the Team Idella club in France, at the first edition of ENDURO CARPE Passion Vidourle on the river Vidourle, at which they participated together with other big clubs. We chatted with them about the competition, the tactics of the French, but also about the passion of fishing, the sport that you start and do not ever stop with.

Sebastian Buta: „The first place won with 40 kg. We used to catch 80 kg of crap in a single game, on the week-ends…”

“We did not expect such a location; I knew that they have many rivers, most carp angler fish in wild rivers. Unfortunately, I started on the wrong foot because the draws are different from ours, meaning that are drawn three balls with booths, and out of the three places the fishermen choose one place. Of course, the people there knew all the places. We took one and ready, by fortune.

The organizer took us to our place on the pond, but it was occupied by a fisherman from the area there. The referee has promised that he will announce him and he will leave, but he did not keep his promise. We had to move to another place. The next day the place was not really OK because we could not launch the sticks, there were many trees, and we sat on our knees to launch, somewhere two meters from the shore, and so on. The next day we had to find another place and to ask the organizer to move from there. 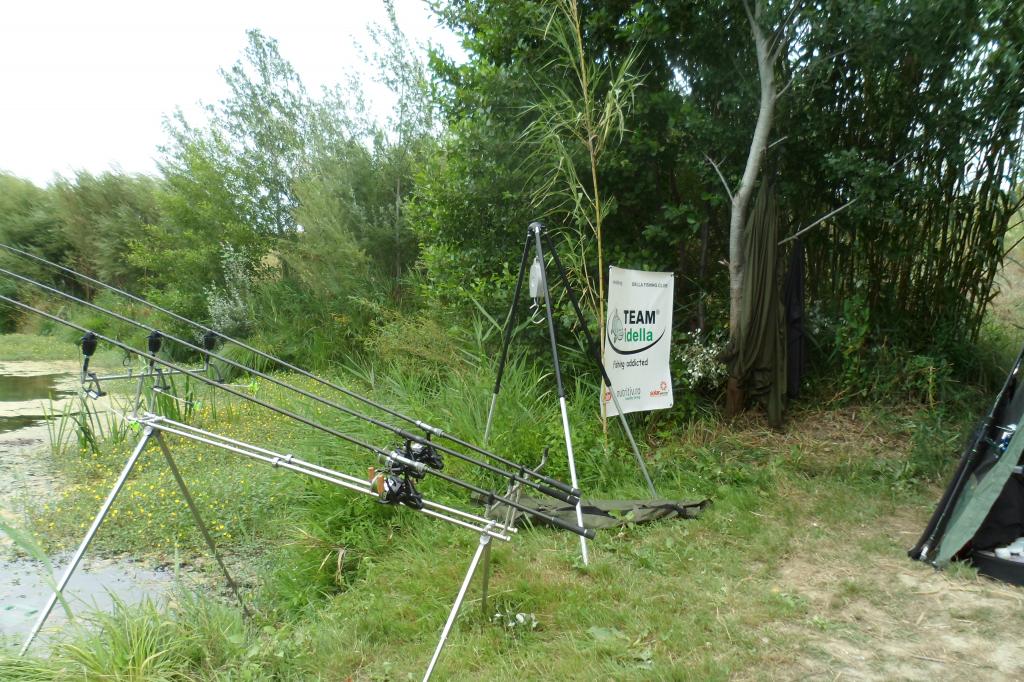 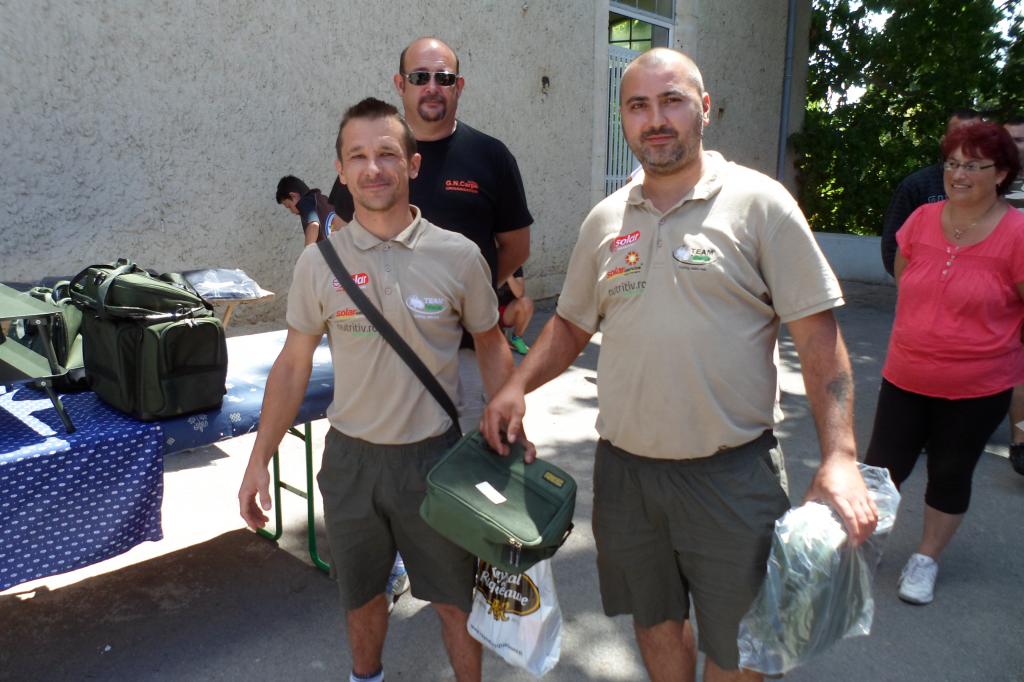 Within 48 hours we moved three times. The first time, one of the organizers was wrong, he told us that that is our stand, but it is not marked. I asked twice if that’s the booth, they said yes, so we got everything and we settled there. Then the referees came to tell us that our place is a lot more in the front. And pick up your things again, and move again. Then we went to our place, the one occupied by natives. We moved next to him. The next day we went to another place. Another bed of bait, and so on. It was not until Saturday afternoon I caught the first fish. We had a total of about 17.4 kg. The biggest fish was 7.2 kg, and I had an adventure with a catfish of three kilograms that entered the pop-up. I do not know how, maybe it liked our pop-up a lot.

All the fishing area spread over about 10 km, the distance between the stands being 2-3 km, very, very high. The organizers were very welcoming, had a good organization. We had chances to win if we had stayed on our booth from day one. We could take at least the third place. The first place won with 40 kg. We used to catch 80 kg of crap in a single game, on the week-ends. That’s it…

In the team we got along well, given that my partner just started carp fishing this year. Only that he began to learn from me, so to speak. He fished, but not for carp and especially not in competitions. Basically it was very ok. 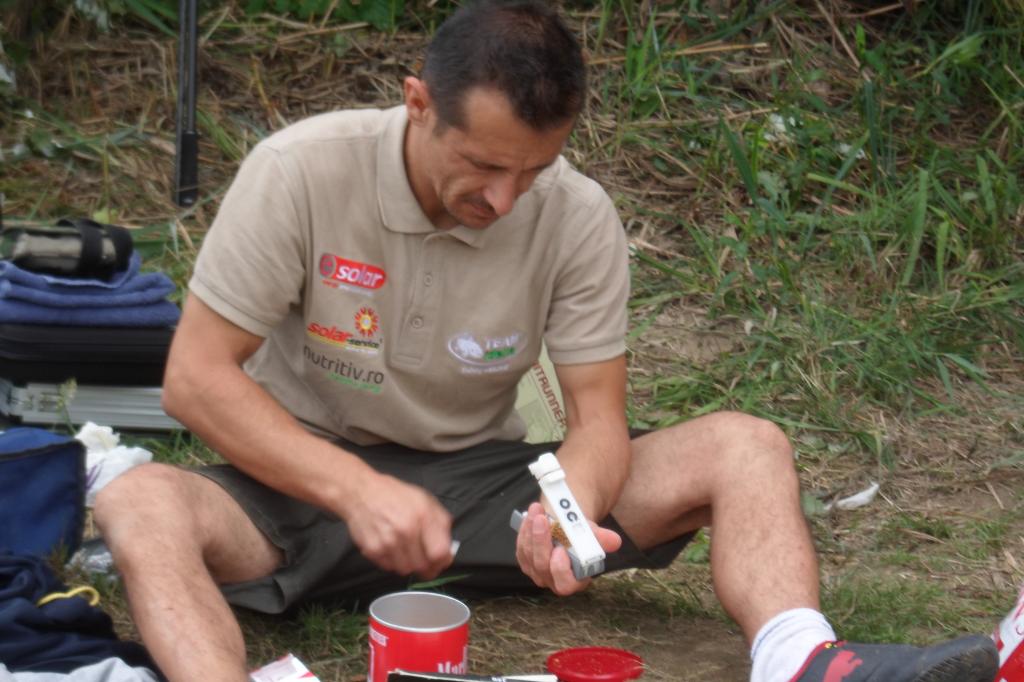 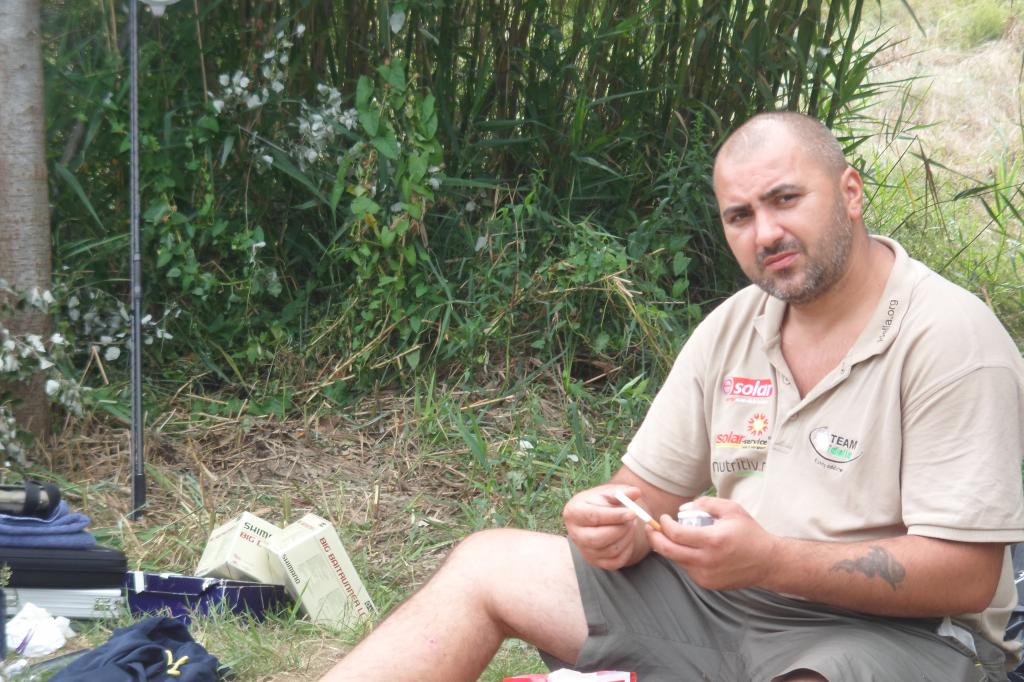 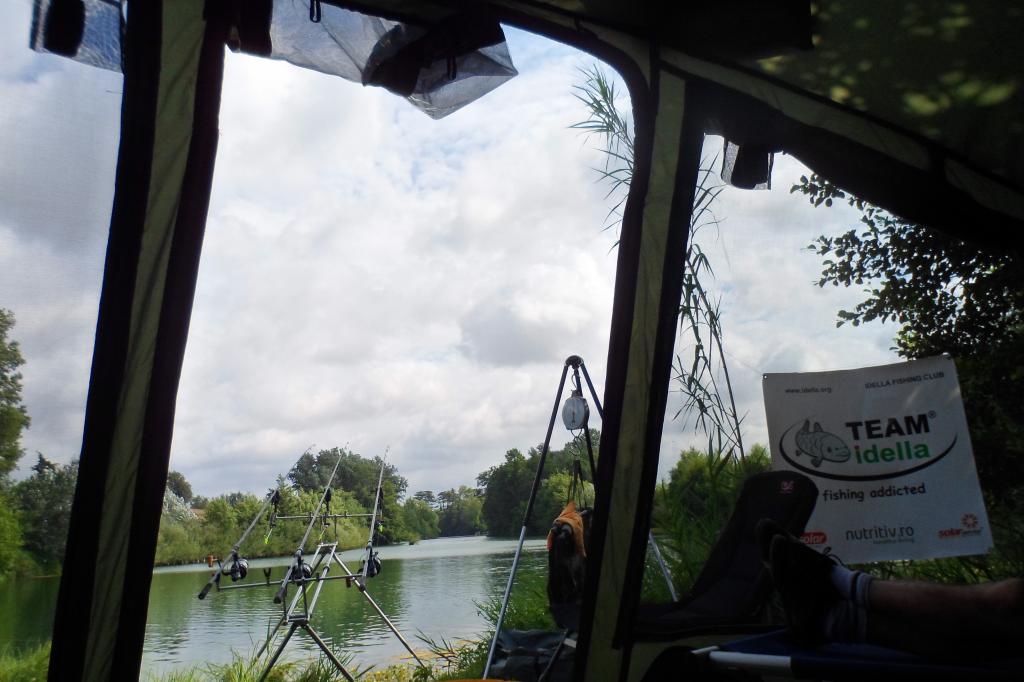 Initially, there were supposed to participate 25 teams, but were only 24 teams, as one did not come. By the end of the contest, seven or eight teams have not even managed to catch one single fish. Yes, at their home! We were glad a bit about the fact that we were not on the last place, that we have not embarrassed ourselves. We took the 9th place. Normally we should have been on the 6th place, but the situations changed as it come to the scales. The other teams did not sleep either, they have also scored some points and we jumped on place 9.

As far as I understood from other fishermen, a few years ago there was an accident with a toxic spill in the water in that particular area, at which many fish died. After the accident there was a restocking, then another, until all four years in a row the water was repopulated. They said that now there are many fish, but we would catch 40 kg on one Saturday night.

When I left home I said that if we do not win a place on the podium, we should be at least in the first ten teams. Considering the teams that participated … there were teams that came directly from Carp Spirit, there was a very strong team from Nice Carp, there was one from GSP Carp, which are very strong, some of the strongest here in the area. There were some big teams, which even invited us to join them for a fishing match in two weeks; they go each month to a contest. We would go also, but we are working and we have free time only from Friday to Sunday.

At home I participated in competitions, here I did not. There are scheduled three or four other competitions at which we would want to participate. We’re going on vacation in August and we hope to go to at least one of them.

Overall it was great! Little nevs, a bit of stress with that moving, but it was worth going. I did everything possible to be among the top 10 and not among the last. Thanks to Team Idella club that was with us and supported us all this time. Perhaps in the future we will obtain even better results. We are proud, the 9th place in a competition in France is a good thing, considering that we did not know the place and did not know what teams we will compete with. We were not discouraged, we fight until the end no matter what, there is no team who scares us. We have balls from Romania, and they are better than theirs!”

Gicu Roman: “An Arab wants to go to Mecca once in a lifetime. A carp angler wants to go to a carp competition in France once in his life, where you fight with the strongest”

“It was super OK, given that I was in a strange place, where it’s very hard to fish. As my colleague said, we moved three times with all tools, tents, sticks, we made ​​three beds of bait. It was very hard, we did not know how the water is … Near the shore, at 30 cm, the water was 4 meters deep. Plus there were many trees, only branches; you had to look for places. Very difficult, but great, we have fought with strong teams. We went with a small car, all came with minibuses and trucks, you realize with whom you fight. In addition, I talked to the boys and they said that at every stick they threw five kilograms of bait. They caught two fish and then changed place. So it was very difficult for us.

I came with the balls from home, with everything. And we had to take permission from work for one day. But it’s ok. Overall it’s ok. It was the first time I participated in such a competition. Otherwise fishing, Seba gave me the passion for fishing, and we used to go fishing to wild rivers here, we stayed and caught many fish. No one caught anything, we went berserk. And, of course, you want to evolve. The next step? Competitions. Fight in competitions here with true carp fishers. Like the saying … „An Arab wants to go to Mecca once in a lifetime. A carp angler wants to go to a carp competition in France once in his life, where you fight with the strongest.” 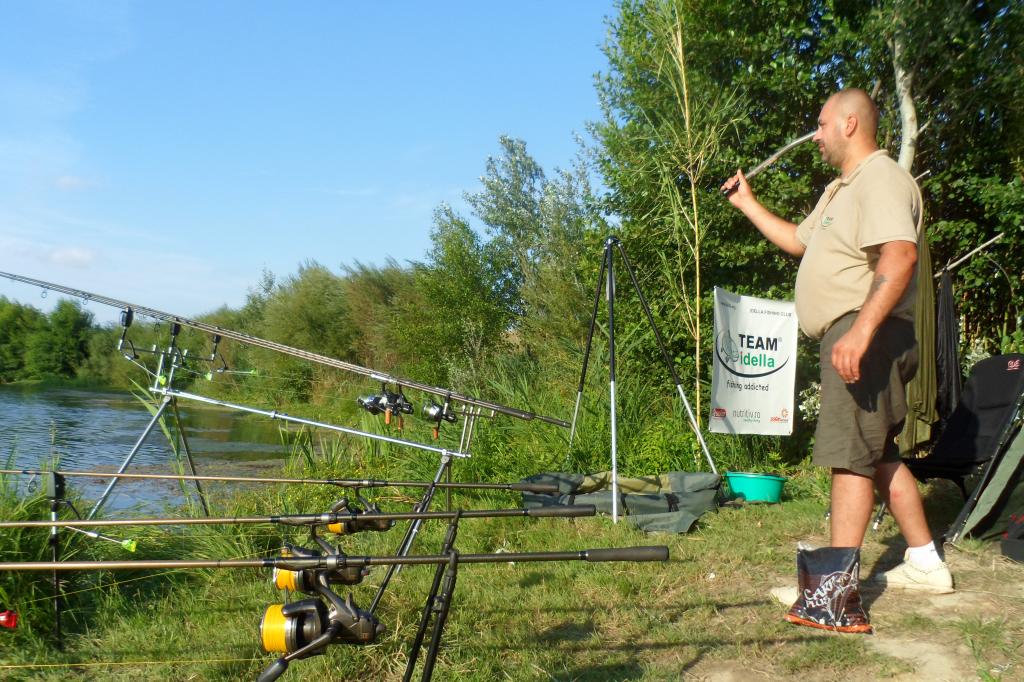 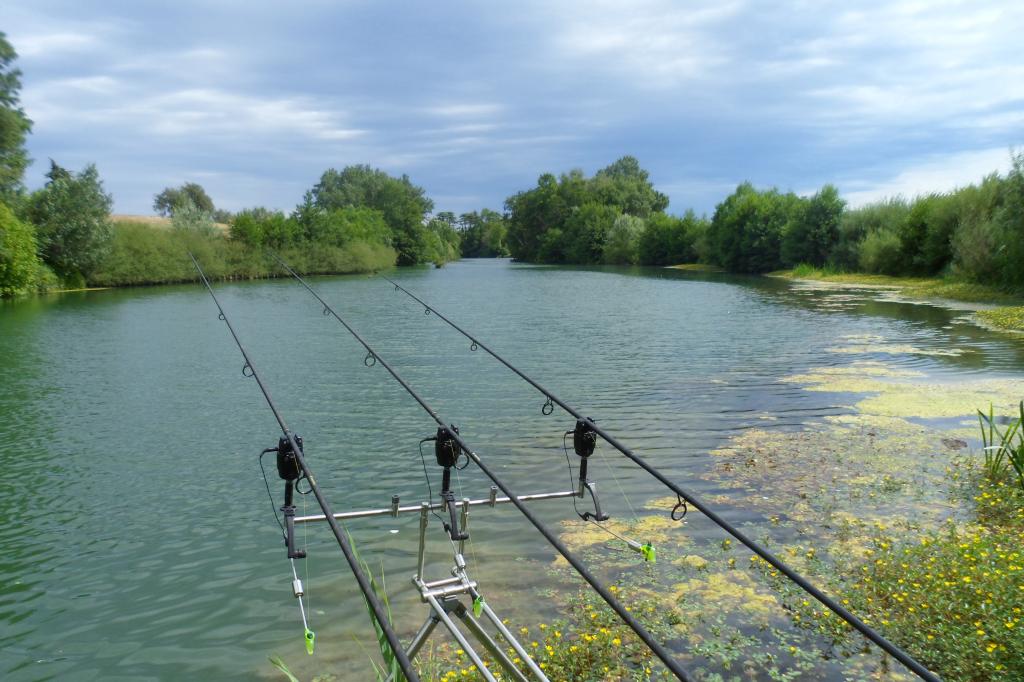 To get ranked on the 9th place, considering that we fished only one night, I say that for us it’s OK. In plus, the teams that have won and have been on the podium gave us their phone numbers and told us that if we want to go fishing, we should go to another place, where there are large fish. They are curious; they want to know the secret, how we managed to attract the fish because, for example, those on the third place have not caught anything on the last night. So we attracted all the fish towards us. There were balls, and the three beds of bait. I used bait from Carp Plus, received from the club.

As a team we got along well. Given that it’s a different style of fishing, it is not like the fishing in the puddle, where you stay and if you caught fish your bait-runner works and you wake up groggy in your tent and go to the sticks with the certainty that there is a catch. Here’s something else. We had to take two-hour shifts, sitting on the chair beside the sticks. The moment you put your hand on the stick you got to run already. To reel and run! Very difficult! I slept a bit, but it does not matter, we make sacrifices.

At home I used to fish on rivers, I was going with friends; I have more friends fishing on the river, not pond carp anglers. I went with them, there was no problem. But here (in France), when we arrived, I wanted to go fishing, of course. And you buy one stick for 12 euro. I said I buy a cheaper one, because I’m not a fisherman. Oh, and when you see what monsters are here, what beasts … And when you see that they break your stick, they break your thread, then you begin to advance and you begin to invest. Today I buy a stick, tomorrow I buy a reel and so on. In time, I bought everything.

It’s hard for us, we are here to work. We work. The money we earn we need for our families, but also for our pleasures. And then you cannot spend 10,000 Euros for fishing tools. No. You have a budget of 100 – 200 Euros per month. And so, in time, you buy them all. But it’s ok, so I got to go and you always want the best. Now we have top class equipment and everything we need. We want to compete with the big fishermen. 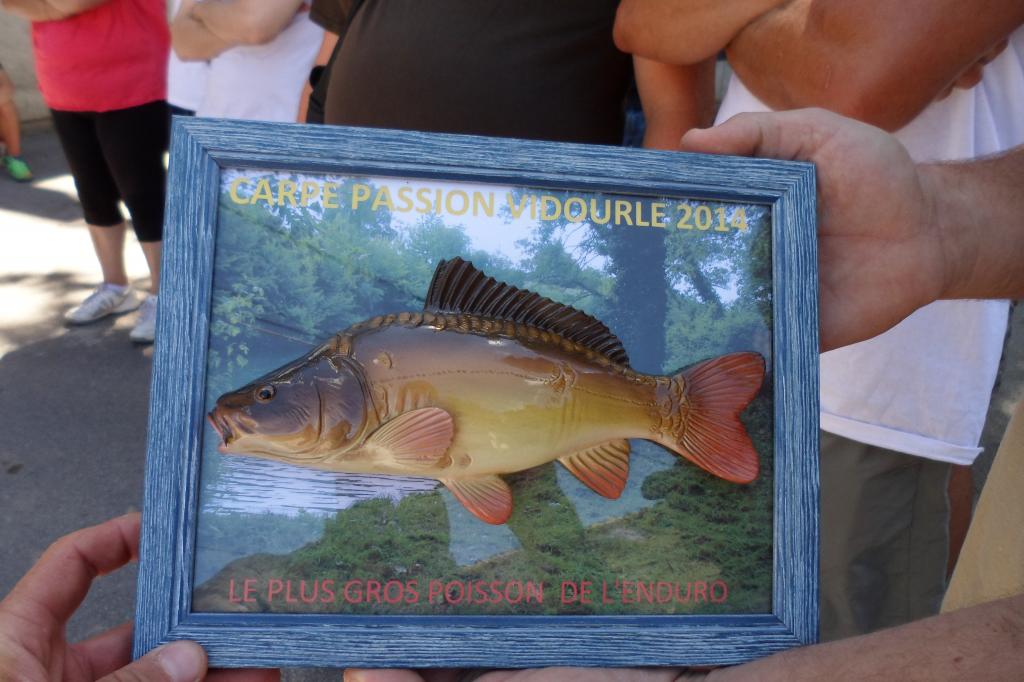 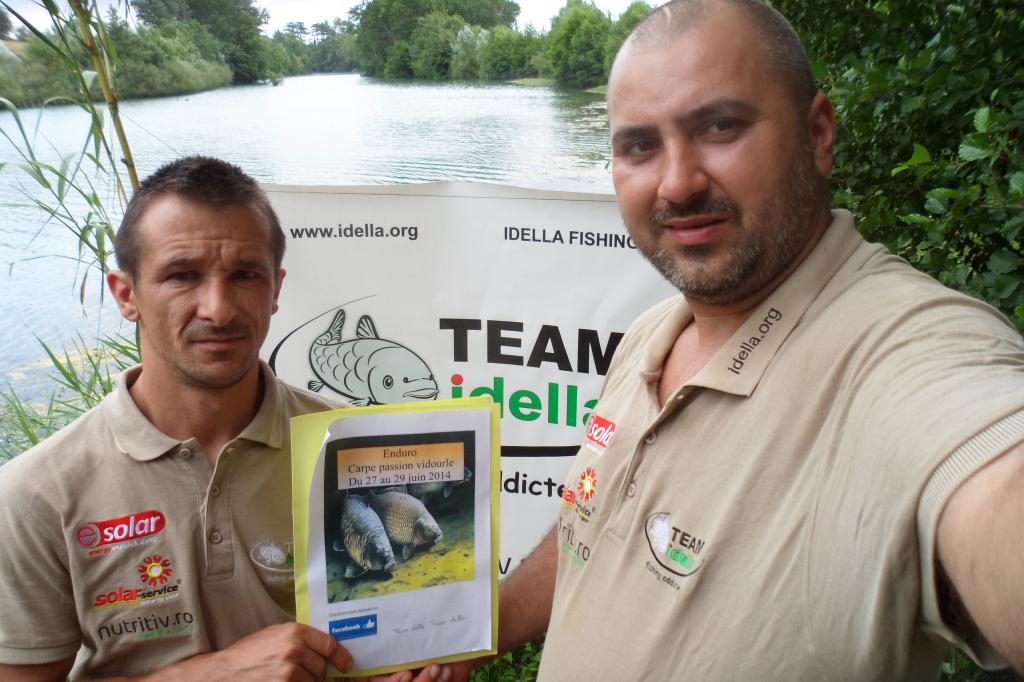 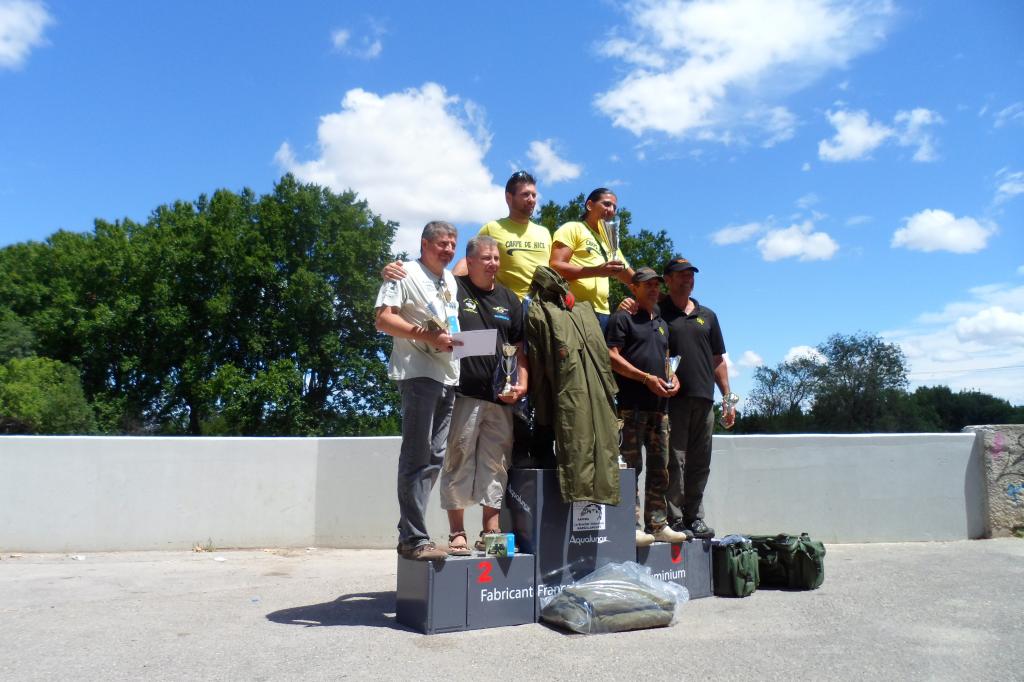 We will come to Romania in August. Currently, as we can bring our nose to the grindstone here, and considering that we became friends with real fishermen, maybe we will go with them to competitions and maybe, at some point, we’ll organize a competition between clubs. To do such fishing match, for a week, would be ok. We will see. They are talkative people, and they saw that we were forced to keep moving. There were guys who did not catch any fish. Locals and fishermen who know the area. We left home with the desire to be in the top 10. Everyone congratulated us, organizers and anglers. The first impression, when they heard that we are Romanian, they cocked their nose than, in the beginning. Well, but when they saw our equipment and everything, they came constantly asking us what place we are. Especially when they saw that we did not catch anything and we started to hit them, they were much more open. They were all friendly. We were told that we would always be welcome at each competition. We, when we got home after the competition, we already had invitations to fishing parties. We hope to go to as many as possible and maybe our employer will come too, so that perhaps we gain a furlough, because he’s also a great fisherman. Given that it is my first contest, I hope that more will come in the future, and when club Idella will organize something again, they can rely on us!”

More photos taken by Team Idella at the first edition of ENDURO CARPE Passion Vidourle 2014 can be viewed here.